“A marathon is hundreds of miles…the finish is the last 26.2”

And what a finish it was!…

Having wanted to run the London Marathon forever and with seven years of unsuccessful application attempts later, I think I have exhausted every possible method of getting a ballot place; donating my registration fee and getting multiple items of trendy ‘rejection’ apparel in the post come October along with the ‘you’re not in’ magazine, not donation my registration fee, estimating a slow finishing time, estimating a fast finishing time, the list goes on. In September, I decided to submit an application to The British Lung Foundation (BLF) for one of their Gold Bond places. Having lost my Mum in December 2009 following a very courageous battle with C.O.P.D. BLF is a charity that will always be very close to my heart. Within minutes of hitting the submit button, my phone rang and after a bit of an informal interview, Laurence offered me a place on Team Breathe. I couldn’t believe it! Me!…Kimberley King was going to be running the London Marathon! Thee London Marathon! And so the chase for a six star finisher was on.

My training officially started in December following some time off for recovery after running the Dublin Marathon in October. The build up to the big day has just been fantastic. I was determined to soak up every bit of it. I didn’t want to miss out on one little bit of the experience. After all, this might be the only time I would ever run VLM.

Not an average Saturday! After an early flight to London Town I got to meet my fellow Team Breathe runners and take part in a full day of training led by RunningWithUs coaches, Tom Craggs and Siobhan Dockerill. Lots of tips on training, nutrition, tapering, injury management topped off with a great interval session in St James’s Park. I came away from the day feeling very motivated and ready to train hard. 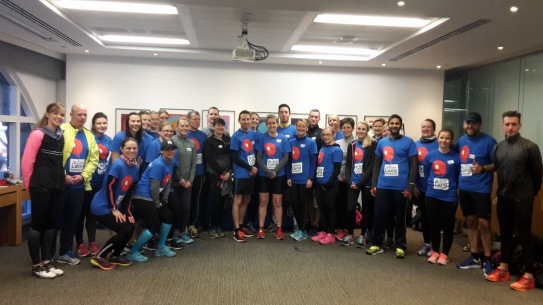 Another great day in the big smoke; listened to the legend that is Martin Yelling, got my book signed by Vassos Alexander, heard some race day tips from Sophie Raworth and announcer Geoff Wightman, met race director Hugh Brasher and did my #ReasonToRun. 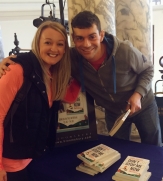 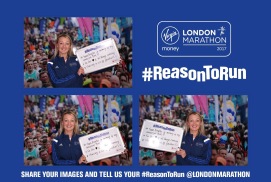 By very kind permission of the Forrest family and the help of Quizmaster Billy, I held my main fundraising event at Rosebank Garden Centre on March 3rd …a Charity Quiz Night and what great fun it was! 42 teams, raffle and sweepstake meant the evening raised the phenomenal total of £1600! Everyone’s kindness and support has really been quite overwhelming. I also had a ‘mile sale’ whereby people could buy one mile for me to run on behalf of someone or in someone’s memory, raising over £500. This along with collection tins, a dress down day at work and donations, the current total stands at £2860! This really will go such a long way to helping support people with lung conditions. 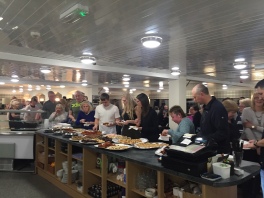 Organised by London Marathon Events, this race was a chance to test out the training on the iconic Silverstone British Grand Prix race track. Although a very long round trip in the car, I thoroughly enjoyed my weekend. It was the first time I had raced this distance, even though I had covered it plenty of times in training and my goal was to finish in less than 2 hours.  I was delighted to run it in 1:56:51 even though I ran over 13.1 miles due to all the weaving on the twisty track. I still felt like I had more in the tank at the end so things were looking good for VLM six weeks later. 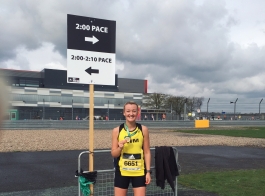 Excited was an understatement!!!

Almost 400 miles of running, umpty hours of yoga and swimming and multiple, torturous (in a good way) sports massages later I was ready for the start line…just about! My training had gone relatively well but a  slight niggle in my hip meant my last long run and taper did not quite go the way I had planned. Thankfully it was just muscular so didn’t cause too much grief and having got to the bottom of it, I know what I need to work on to get stronger.

I feel very lucky to have such kind and thoughtful friends and family and received lots of lovely good luck wishes, cards, messages and hugs in the build up to the weekend.

The Lindsay – Forrest Support Team with Big Rab as ‘chief coach’ were accompanying me for the weekend. It was so lovely to have them there and when they come to pick you up looking like this vuvuzela in hand, trumpets at the ready and Chariots of Fire as the backing track blasting from the car, you know they meant business! 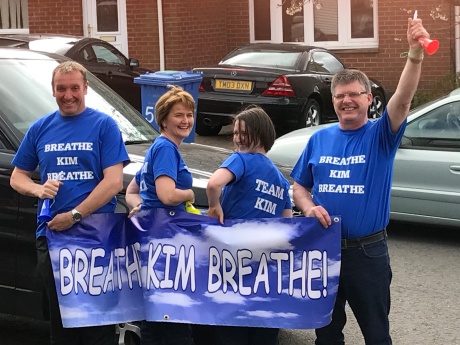 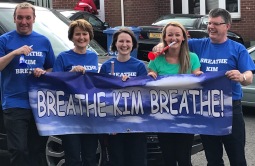 Fellow Scot and footballing legend, Ally McCoist briefly joined the support team in the departure lounge at Glasgow Airport and after arriving in Trafalgar Square at around 10pm it was time for bed knowing I probably wouldn’t have the best of sleeps come the Saturday!

Saturday itself was very exciting. A post-breakfast walk to The Mall  gave us the first glimpse of the the finish line. Set-up underway with military precision, it was actually pretty cool to see that side of things in action.

We took the tube to the ExCel Centre, Docklands to visit the Expo, pick up the race pack and soak up some of the atmosphere. The hall, buzzing with excited and nervous runners had lots of running related stalls to entice you to spend your pennies along with photo opportunities a-plenty! The main stage was busy with the experts sharing some much needed final words of wisdom. 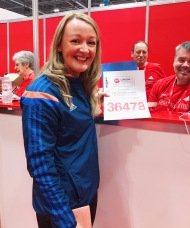 And then I met my hero!… The one and only legend that is Paula Radcliffe! 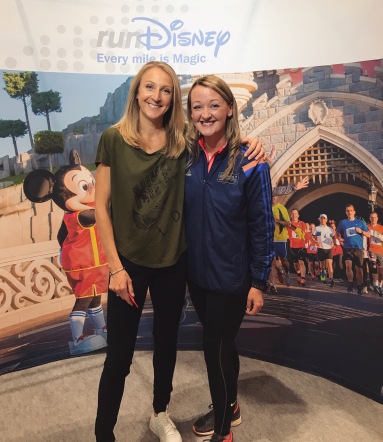 Having planned a relatively quiet day, after the excitement of the Expo, we made our way back to Covent Garden where I picked up some nice new running sunnies from the Flagship Oakley store. Next up, carb loading galore in the form of my long run staple…Chicken Penne Arabiata with bread and lots of water then back at the hotel to rest the legs. A final check of the kit and pre- race day nightcap on the bubbly stuff (sparkling water!) at the Admiral Pub in Trafalgar Square, it was lights out by 9.30pm.

Tomorrow is the big one!

Breakfast with Welsh Rugby International, Shane Williams (it seemed quite the weekend for mingling with famous sports stars!) who was also running before making our way to the tube to transfer to Greenwich Park for the start line.

The tube stations were absolutely packed full of runners and travel in London is free on marathon day with a race number. Whilst I thought the journey to Greenwich would include a brilliant atmosphere, it was actually quite the opposite. All very serious business for those on board. There was very little talking and it was quite clear all of the runners were getting themselves in ‘the zone’.  The short walk to the park was quite a sight to behold. Supporters were only allowed to come so far in to the park as after a certain point, it was runners only. Final pep talk from ‘Coach Rab‘ and the team with some emotional hugs goodbye. 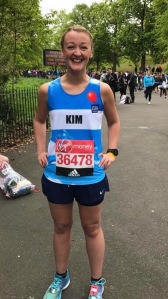 I made my way to the Red Start and having decided a trip to the  female urinals was one part of the experience I was willing to miss out on, I did the obligatory pre-race ritual of joining the queue for the portaloos. I got to my starting area, Pen 6,  quite early. The mass start was 10am and being there lined up as part of the crowd of thousands was very special. The final countdown was on and with a minute to go came the iconic noise of the heartbeat from speakers around the park. The gun went off at exactly 10am and…here we go! NO! Nothing! We were not actually off for another 17 minutes, the time taken to  cross the start line. I’ve spent every London Marathon day for as long as I can remember glued to the television in awe of the sights so I knew the support on route was going to be amazing. There aren’t quite enough words to describe how truly special it was, literally from beginning to end. Londoners offering water, jelly sweets, hugs and encouragement, support from across the globe, flags from every country you could imagine, bands, motivational signs not to mention charity cheer points galore!

I  had goosebumps the whole way round, so, so much to take in and so many times my eyes would well up with tears thinking about how special this experience was and how lucky I was to be part of it. I was aiming to finish in around 4 hours however my race strategy didn’t exactly go to plan and the times on my pace band quickly went out of the window. I started to feel a bit sick just after the half way point until around mile 19 which in hindsight I think was as a result of taking on too much water. I’m not used to doing my long training runs with water but took on quite a bit early on during the race due to it being quite warm. So, with a bit of readjusting I settled my thinking that as long as I got a PB time I would be happy. 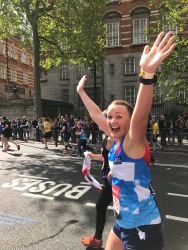 Every minute of the race was special but Tower Bridge (you hear it well before you see it!) and the final miles along Embankment with the view of Big Ben in the distance and the finish on to The Mall were definite highlights… memories I will never ever forget! The route was pretty crowded with runners throughout and I managed to miss the gang at around mile 7, Cutty Sark (I know…they come all this way!) but it was just amazing to see them along the route giving it their all…quite simply the best supporters in the country, including all of the wonderful well-wishers back home! I know people laugh at this statement, but it is actually quite a stressful experience for spectators!  I finished in 4:37 which was a PB time for me so I was pleased with that but deep down I couldn’t help but feel a little disappointed, after all I’d only improved on my Dublin time by around 4 minutes but it really didn’t take away from how truly special the day itself was.

After collecting the beaut of a medal and a weary walk down the mile for my goody bag, we had a lovely time back at the BLF post-race reception. A much needed cup of tea, massage for the tired pins and a good chance to catch up with other Team Breathe buddies about how their race had gone. I also did a wee bit of filming in my sorry, sweaty state for the BLF 2018 campaign. BLF Video: What is it like to run for Team Breathe?

I have been completely overwhelmed by everyone’s support and encouragement towards my fundraising, training and generally indulging me in putting up with my ‘talking about all things London’ chat for the past 9 months. With very special thanks to BLF, the London Marathon really was a ‘bucket list’ dream come true and the start of a very big adventure for me! Marathon number 4 and my first Abbott World Marathon Major complete.

I think that this little quote from ‘Run the Smoke’ sums up the entire experience perfectly!

I am in always in awe of the spirit of the runners and supporters during a marathon. Supporting the best charity at thee greatest race in thee best city in the world and I got to be a part of it!

London, thank you for the memories…until the next time!