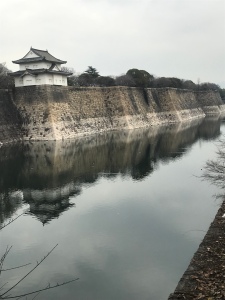 A quick stop off and although it is not the most pretty of cities, Lonely Planet tells me that the unofficial slogan of Osaka is kuidaore…eat until you drop. I think we’ll get on just fine!

A forty five minute easy run was on the plan today and research told me the best spot for running was Castle Park. It didn’t disappoint, though I can imagine it would have been even more beautiful had it been Cherry Blossom season with just the hint of pink starting to appear on the trees. Better planning next time, Kimbo.

In the afternoon, a nice bit of active recovery. I walked to Dotombori, a lively spot that is essentially a pedestrian walkway with the flashiest of signs (verging on the ridiculous) and a brilliant selection of street food ready for sampling. 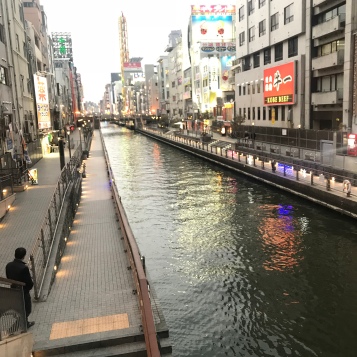 I managed to catch the Glico Running Man, one of the most well known landmarks here and any running connection was obviously a ‘must do’. The ironic thing though 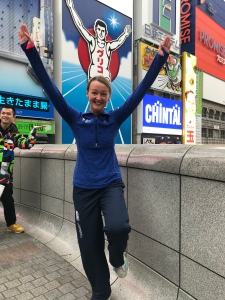 is I learned the man has ‘hee haw’ to do with running and is actually advertising Glico, manufacturer of one of Asia’s most famous confectionery companies. I sampled a few varieties of one of their most popular sweets (Pocky Sticks) during my stay in Japan. Let’s just hope that doesn’t go against me come race day!

I wanted to try Takoyaki (aka octopus balls), essentially Osaka’s answer to fast food; a little round ball of fried wheat with a small piece of octopus inside. Served with salad and sauce, they were slightly on the chewy side. I’m making an effort to get all of my ‘experimental eating’ of the new and somewhat exotic foods done well ahead of race week so we are not taking any chances. 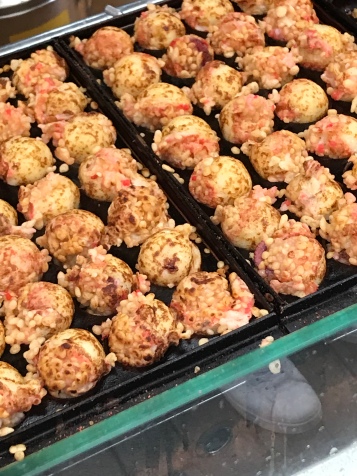 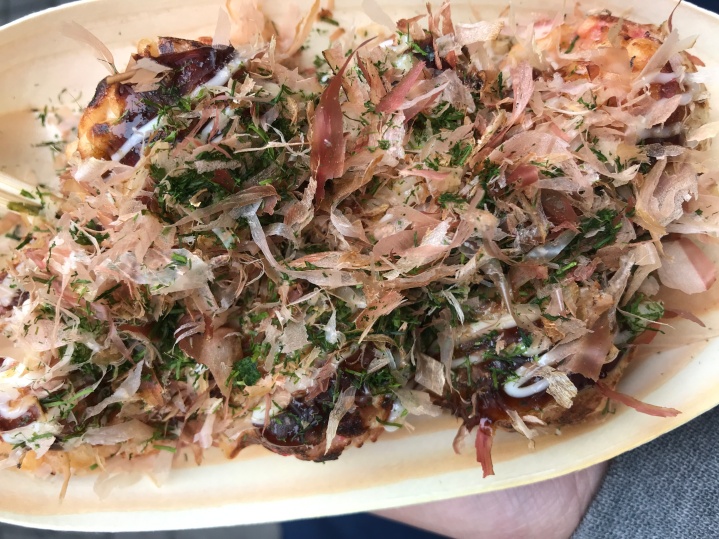 All in all, a lovely evening of people watching in Japan’s answer to Sauchihall Street.

Being a city with slightly less to see, I had only booked to stay two nights in Osaka and for once, I finally got it right. No extra time was needed.

My training run for today was a lighter, sharpening session; 40 minutes to include efforts of 5/4/3/2/1. This session has featured on my plan a few times now and I really like it. A little more of an effort than an easy run, but not so much that you are absolutely ‘beasting it’. Tom was clear that is should be a lighter and controlled session given that race week is fast approaching.

I went back to the grounds of Castle Park because I’m confident there is no prettier place in this city to run. Timed perfectly, I finished outside Gout Café for a delicious pastry breakfast, the hard part was narrowing it down to pick just one. Selection made, I walked back to the park to sit on one of the benches and enjoy it… the nice thing about travelling – there is nowhere else you have to be other than where you are…what a lovely thought.

This afternoon I was making my way to Hiroshima. It seems inappropriate to say I am looking forward to visiting somewhere that is known throughout the world for the devastating destruction of the atomic bomb disaster but it seems only right to make the trip to this historic city.